My family is in a box.

At present, it is 6:32 a.m… I’ve been up all night. I did not get to the bottom of the small box; too many tears blurred my vision. I had had all that I could take.

I had no one to talk to at this hour. So I tried hacking into my old blog to tell the world instead. No such luck. Well, I hadn’t been able to get into it for 7 years. And this “brand-new Grandma” must say:  technology has changed! I can hardly figure this awful formatting out!

Anyway, I needed to tell someone: I found my family!

My father passed away 6 and a half years ago. My mother promptly packed our 164-year-old family home (for the second time; we had sold it 20 years earlier and later bought it back) and moved out west full-time; as she had been longing to do for years, and rightly so.

My folks had attended college out west, and the west has a way of pulling at you:  They ached to get back to the beautiful Rocky Mountains.

In the early 70’s, my parents loaded-up my 3 little sisters and I into two vehicles, boarded the cats, and somehow talked the babysitter into coming along with us. Every year. We suddenly had a new life which entailed spending every summer in Montana. Half of us rode in the “Cool Car;” (meaning Dad drove) the other half of the family followed in the “Nerd Car” with Mom.

“Anybody got their ears on? Earth Mother to Blue Jay, what’s your 10-20,” chimed my mother on our C.B. radios. All-time highlight of every trip:  Each time we caught a semi getting close, and finally starting to pass us, my sisters and I would hastily grip our little hands tightly into fists, uncontrollably crank our arms up and down, up and down, up and down; eagerly awaiting the sound of a blowing horn. SUCCESS! On the flip-side, and I’m just gonna say it:  It really sucked when they didn’t pull that string; or however it is that they blow that horn!

The old, yellow suburban…invariably doing her job. She hauled a trailer, or something equivalently heavy and annoying behind her each summer; hundreds of stops to “check the tail-lights,” tires inevitably blowing; pulling over because mom was lagging behind and we didn’t want to lose her.

“The Suburban:”  Highly unpopular with the neighbors, as it didn’t conform to the aesthetics of the neighborhood, 😊, which only made my dad love his “Montana Rig” even more!)

We were headed northwest to our new land; fulfilling my parents’ dream of building our own 24′ x 24′ cabin by hand; while giving my sisters and I an unconventional, life-changing, albeit wondrous experience to boot!

Blaring through the 8-track deck, Johnny Cash tried as he might to drown out the deafening and hot wind that exploded through the windows. Said wind kept wildly-busy for hundreds of miles annihilating our long, blond hair. It blasted through the “rolled-down-all-the-way” windows. We HAD air-conditioning. Dad always liked his fresh air; and always had one very tan arm. Our blond locks were ferocious unmanned kites caught in a tornado throughout the long, long journey to the Wild, Wild West.

Mom really wanted to reside there full-time. The rest of us? Um…we didn’t love latrine’s, (aka digging a trench to squat over instead of comfortably sitting atop a throne that flushes) having no phone, no electricity, no running water…besides that whole nightmare, half of us were beach people; not the “mountain-type.”

Sixteen years after becoming the youngest Judge ever, at that time (age 26) in Illinois, Mom and Dad sold our family home and moved my little sisters and me to the middle of the Rocky Mountains:  “Boondocks, USA.” I had just finished 8th grade. Dad practiced law, and we stayed throughout my high school years. Then, we did what everybody eventually has to do:  We left.

There is only one reason why people leave Montana:   J.O.B.S.

Work is almost non-existent in The Big Sky Country. (My dad had literally been paid in “cords of wood” at times.)

And now, back to The Box:  Dad has 2 sisters. I’d been taking care of one them for the past 2 or 3 years, my sweet aunt, who had stage IV cancer. She just passed 9 months ago. She died the same week my eldest daughter had my very first grandchild 1800 miles away in Montana. I was back out in the “‘Ole West” to meet my amazing 5 day old grand baby when my aunt died. (The exact time of my aunt’s death is actually a whole other story; a pretty spooky, amazing account as a matter of fact. But that is nothing new in our family. After all, the accused witches of Salem, Massachusetts, Sarah, Mary, and Rebecca, were my ancestors. Their brother Jacob was my grandfather. True story.)

Fast forward nine months now. I returned a month ago from a beautiful birthday trip that was given to me. That precious time “Out to The (406)” made it possible for me to visit two of my 5 daughters, son-in-law, grand baby; and next, my mother. But only after travelling again for what felt like millions and millions of more miles, 8 or 9 hours, or 10,(?) and after having already traveled for days reading “Wall Drug” billboards for hundreds of miles; hoping to eventually get a glimpse of that BIG, BEAUTIFUL, BLUE, SIGHT-FOR-SORE-EYES cherished metal sign: “WELCOME to Montana,” to the other end of the Big Sky Country to check-in with my mother.

During our short stay at Mom’s, I made a HUGE discovery:  Two boxes. One was labeled for my father’s living sister, the other for my now deceased aunt. My mother had saved a few mementos that had belonged to my father to give to his little sisters. My aunts had hoped she would. After our (extended-because-I didn’t-want-to-leave) two-night stay at the cabin with my mother, and after goodbyes were said and done, I stole The Box. The Box that was intended for my deceased aunt.

I’m not sure why I didn’t ask for it; my mom would have given it to me.

Nevertheless, I decided to steal it. John and I plotted the whole strategic plan while we were there. (We discovered it within a couple of hours of our arrival.)

But seriously:  Six and a half years had gone by, and my aunts had not received their boxes as of yet. And now it was too late for Kath to receive hers. Therefore, that box was rightly mine. Period. End of story. My whole house is chock-full of her belongings, as she had no children. She called me her daughter. And let me tell you, she desperately wanted anything of my fathers. We all did! Anything! A pen; his beloved nasal-spray, a shirt would have been golden! You name it. We wanted him.

I didn’t care if the only thing in it were old campaign buttons…or a case of green, felt-tipped pens. The Box was mine. And I couldn’t WAIT to get home and look at my Daddy’s things!

Well. There was no nasal spray; and not one campaign button. Instead; what I found was my family.

I found my dad.

I found my aunt.

I found my beloved grandma who had died 30 years ago. And…I found my grandpa whom I’d never had the chance to meet. My grandpa who died on his birthday. My grandpa whose birthday on which I was born exactly one-year later. I was his first grandchild.

Along with being the first baby in the family; being born on my grandpa’s birthday; born on the day he died exactly one year later:  I was born in the very same hospital room in which he passed. He died at 9:09 a.m. Can you guess my time of birth? Indeed, I took my first breath at 9:09a.m. (Told ya we had “Woo Woo” stuff in our family).

What hit me most going through The Box, (after my learning about, and meeting my Aunty again) was finding my great-uncle. I remember him. Every time Uncle Newell came to visit, he always, always brought sugar cookies. He strode through our side door, and set that beautiful, white, waxy, paper bag that he brought all the way from the bakery in Port Byron, IL. on the kitchen table. They were the best cookies I ever remember! Next, my great-uncle always stood straight-up, in his 3-piece suit, right next to the radiator in our kitchen. He was tall with a good posture; then, he would roll UP on his toes, and go back on his heels. Rock up on his toes; roll back on his heels. He was handsome, albeit “old.” (Old to, 8, 9, or 10 year old me.) Handsome; still a bachelor at 70 or 80…? His clothes did not… um…have the best scent. It was sad. Worse yet, I knew the imminent and dreaded hug was coming. I always felt so guilty, even as that child, for despising the impending hug.

40 years later, here he was. I learned SO MUCH. Uncle Newell was FUNNY. Not only was he so EXTREMELY intelligent, (which I knew) but I learned that he was SUCH a good brother to his 6 siblings. (It’s too late at this hour, or rather, EARLY, for me to correctly count the sisters and brothers).I found letters. Letters and letters and letters in immaculate condition, beautiful penmanship, and soo informative! My uncle had written numerous letters to his sister, my amazing grandmama. He was just leaving for the war in 1942. There was much pertinent information in the few letters that I did read. Pertinent. Serious. Important. But the humor! My GOODNESS, I couldn’t get over it! I remember him as such a serious, although, smiley man. Of course I was just a “baby;” those were my only memories.

Naturally, I wanted to phone my father immediately to ask him—to just say to him: “Uncle Newell was FUNNY! I know that! Did you know that??”

In less than a split second, I remembered I couldn’t call. Dad was dead, too.

Of course you knew that, Dad! I just…wanted to…tell you that I…know, too. After all of these decades, Daddy!

What a precious gift; an inconceivable blessing!

I found my family.

I am not alone.

My family is in The Blessing Box. 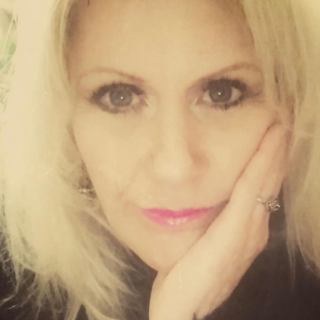